The elderly had a life full of work and sacrifices, but they still remain one of the most vulnerable social categories. In order to make a positive change, the socio-medical home care center CASMED tried to reduce, at least for one day, the burden of the marginalization sentiment which torments our aged permanently.
On October 1st Balti has celebrated the International Day of the Elderly Persons. CASMED, together with the city council, organized “Health+” campaign. It was financially supported by the Swiss HEKS Foundation and the Czech Diaconia organization. According to the participants this kind of event was first run in Balti; earlier they have been organized only in Chisinau. Through this campaign CASMED continued promoting the access of the elderly to medical home care via providing free measurement of blood pressure, blood glucose and body weight. The measurements have been done by to medical of our medical assistants with log-term experience in taking care for the elderly at their homes. They resumed the results of the measurements. The biggest amount registered was 180/100 mm Hg, other participants did not surpass the level of 160/100 mm Hg. An old man, who for the first time measured his blood glucose level had 18 mmol/l. In order to get the most exact results, the participants have been informed about the rules of the medical tests. The campaign has been running in the center of the city, near the central market where the biggest concentration of persons is located. Still, most of the elderly who wanted to benefit of the services where skeptic with regards to the fact that it is free. CASMED volunteers helped to overcome this barrier. They encouraged the elderly to participate in the campaign and to check their health-state. The volunteers and the medical assistants distributed flyers about high blood pressure and diabetes, which are considered to be the most common pathologies of the elderly. This event has also attracted younger persons aged 30-50. Because of time lack they do not manage to consult a doctor, but our free campaign helped them get a general image about their health-state. 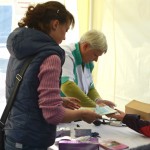 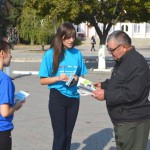 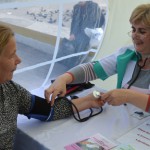 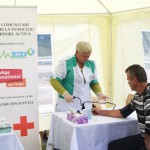 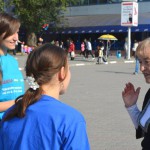 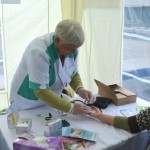